The “Space Descend” part runs in at 50 fps and 5 bitplanes. The background is 8-colors and uses Perlin Noise as described in the first effects post. The white object and flashes is made using the 1-bitplane version of the Scene Player and renderes into last bitplane (Bitplane 5). The 3D scene is built in Houdini, imported into Maya and exported from there. We also have some extra lines added on top that is made separate from the scene to allow for thinner flashes.

The impacts on the ground when when the flashes hits is rendered using the blitter and uses 4 bitplanes and some of the colors from the background and combination with the 4 bitplane. The initial idea was to have more impacts here as the code is written to support more but we ended up not using as many. The colors for the city is set by a copper split that moves upwards as the screen is scrolling so the background is always 8 colors but the palette change gives some more life to the scene as adds another color range. 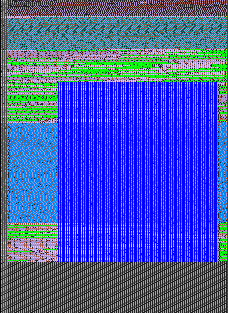 Even with this relative simple scene we don’t have a lot of DMA time left here but it’s enough to also have some blitter impacts using the blitter at then of of the last line rendering.

The “Forest Lines” part is a simple one and short. The part runs in 5 bitplanes where the background is 8 colors and uses the same palette flicker as above. The line rendering is done incrementally in the background buffer using the CPU and has various speeds and placements. Bitplane 4 is used for some extra colors of shades for the lines and bitplane 5 is used for the “wipe-out” effect rendered on top. The wipe-out effect is a very short sequence also made with the Scene Player

We had to spend some time to get the flickering right for this part to give the sense of lighting going on but it turned out quite good.

Pillar of Light I

This part uses 5 bitplanes and the layers looks like this

At the start of the part we have a transition between two images that can be a bit hard to see at first but it gives a sense of a light pillar coming up from the ground. 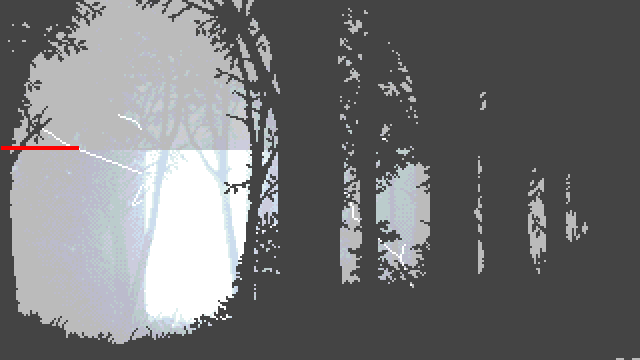 The leaves in the part is made in Houdini. A custom tool was made in order to export it for Amiga usage. It pretty much support of 4-bit positions and a tile index to index into a chart of of pre-rotated leaves to keep the part running at 50 fps. The frames are stored as 25 fps and then every other frame we interpolate between the previous and new position to have it running smooth and it’s not really possible to tell the difference. The data for the keys are about 22k compressed on disk which isn’t too bad.

We again considered doing something more real-time calculated but getting something moving smoothly with wind effects and such is doable but a bit complex to get really good looking so we went with Houdini again to have full artist control over the movement.

Again we render using the copper to kick of blits. 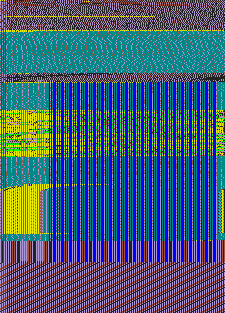 In this part we also use sub-pixel scrolling that is explained in Part 2 of the effects write-up. In this case we only use 2 images instead of 4 to save space and memory, still it gives a much smoother look to the background when scrolling. We don’t do any sub-pixel scrolling on the foreground as it’s dynamic and as it moves faster, only has single color and has more things going on it isn’t as big win as the background.